Between Truth and Lies 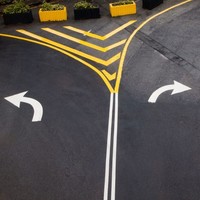 Figure out which escape route the thief took!

A police inspector wants to solve a theft and is close to tracking down the thief. To reconstruct the crime, he must follow the escape route, and wonders which of two possible paths the thief took. To clarify this, the police inspector interviews three witnesses. Therefore, he is allowed to ask two questions, but may only pose one question to one witness at a time. The witnesses include a notorious liar, a totally honest person, and someone who lies on occasion. The police inspector does not know which of the three witnesses always lies, occasionally lies, or always tells the truth.

The first question to ask a witness is:

Which of these other witnesses is more likely to tell the truth?

The answers have to be divided into three possible scenarios:

Looking at the answers, you see that the "occasional liar" is either the questioned witness or the one being pointed to by the other witnesses. Meaning, the person who is neither questioned nor pointed to by the other witnesses cannot be the "occasional liar." The person either always tells the truth or always kies. The police officer now asks the second, more complicated question to this particular witness:

Which escape route would the witness who does not occasionally lie choose?

The following two cases are possible:

In both cases, the interviewees point out the incorrect escape route. Now, the police inspector must simply choose the other path to successfully complete his investigation and catch the thief.

To solve this riddle, it is necessary to ensure that the first question eliminates the possibility that the second question is addressed to the "occasional liar." If you have identified a person who always behaves the same way (regardless of whether he always lies or always tells the truth), then you can solve the riddle with the help of an appropriate second question.