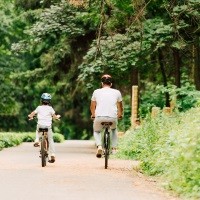 Find out which light burns brighter!

A father goes on a bicycle ride with his son. While the father uses a man's bicycle with large wheels, the young son rides a child's bicycle with correspondingly small wheels. Both bicycles have the same type of dynamo (a small electrical generator for powering bicycle lights) and the same light with the same bulb. The tire's diameter is not relevant for the task and can be ignored.

Which light burns brighter when the bicycles are traveling at the same speed?

If father and son ride at the same speed and the diameter of the tires is ignored, the bicycles have the same circumferential speed, which is equal to the speed travelled. Both lights therefore burn with the same brightness. The child's bike has a higher angular speed and thus rotates more often, but the speed at the radius is the same as the big bike.

Go To
Go To