Please note: All product-related documents, such as certificates, declarations of conformity, etc., which were issued prior to the conversion under the name Pepperl+Fuchs GmbH or Pepperl+Fuchs AG, also apply to Pepperl+Fuchs SE.

The VBA-4E-G4-ZE AS-Interface coupling module is a G4 module with 4 inputs. Mechanical contacts and 2- and 3-wire sensors can be connected to the inputs. The sensors are supplied via the module.

The IP67 rated G4 module is especially suitable for rough conditions. Sensors attach to cable glands and cage tension spring terminals thus making the installation especially user-friendly. For pre-addressing the module it can be plugged directly onto the adapter of the hand-held programming device VBP-HH1.

The current switching state of each channel is indicated by an LED, located on the module's top side. 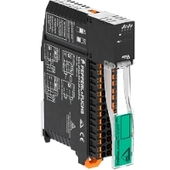 Get to know our full range of AS-Interface products.