Which Symbol Do I Have? 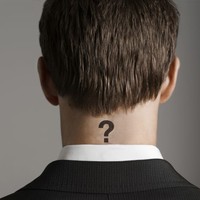 How can the man figure out the symbol on his neck?

Four men were kidnapped because they had treasure. They are lined up one after the other, and each gets a symbol painted on his neck. Between the first three men and the fourth is a wall, so no one can see him, and he cannot see the others. The first man can see the second and third, and the second man can see the third. The men know that the symbols include two suns and two snakes. They have to stand perfectly in place, and they cannot talk to each other.

All the men will get their treasure back if one of them correctly guesses which symbol he has on his neck. After a few minutes, a man gives the correct answer.

Who was it and how did he know?

The second man answers after a few minutes. He saw that the man in front of him had a sun and thought that if he also had that symbol, the first man would have known that he had a snake. But because the first man had not answered within a few minutes, the second man knew that he must have a different symbol on his neck than the third.