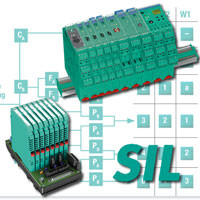 Transmitter power supplies for intrinsically safe applications according to EN 61508

Transmitter power supplies from the K- and H-Systems have been extended to include two additional power supply modules that are designed for intrinsically safe applications up to SIL 3 according to EN 61508.

The advantage of these transmitter power supplies is that only a single transmitter is required to construct an intrinsically safe signal circuit for SIL 3. Previously, for SIL 3, this was only possible using two separate loops, both of which had to be monitored for redundancy reasons. With these modules, internal diagnostic functions are also signaled via a single output and red LED. An additional advantage is that prescribed test intervals can be extended for SIL 2 applications up to ten years.

The new, single-channel KCD2-STC-Ex1.ES and KFD2-STC4-Ex1.ES transmitter power supplies are only 12.5 mm and 20 mm in width respectively and offer an active and passive 4…20 mA output signal as well as 1…5 V for the control side. They also supplement the K-System, which incorporates about 150 different intrinsically safe isolated barriers and signal conditioners. Assembled to the DIN mounting rail (35 mm) with the power rail, the devices are able to provide information about internal diagnostics using a single failure signal.