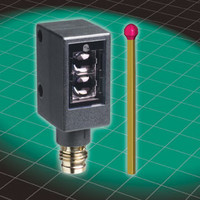 ML4.2 dual-sensor redundant detection models feature dual light beams from two emitter LEDs that reflect light to two receivers. These beams act as a logic “OR” so that either beam can switch the output. Having a redundant light beam enables transparent or glossy objects that are foil or plastic-wrapped to be much more reliably sensed when compared with single-beam sensing.

“This model provides an affordable means of aligning or guiding translucent paper, plastic, and fabric webs, as it serves as two sensors in one package.  When the web is properly positioned, one beam detects the web while the other beam does not.  This photoelectric sensor can also be used to detect a gap between two objects to suppress the detection of small particles such as paper dust. Other potential applications include semiconductor and PCB positioning for conveying and buffering,” explains Allison.

Two precise sensing models are now available to deliver the sharpest sensing distance cutoff and smallest switching hysteresis on the market for background suppression sensors.  The first model is available with a visible red emitter, and senses black and white color extremes within an extremely tight sensing window.  A black test object is sensed up to 20 mm from the sensor, a white test object is sensed up to 21 mm away, and no targets are detected at or beyond 22 mm.

“This level of precision is significant for users with objects that need to be detected just one to three millimeters in front of the background, such as detecting a piece of cardstock on a belt, or the angle or straightness of paper in a feeder,” says Allison.

A new ML4.2 Series retroreflective sensing model with no sensing deadband is used with a corner-cube reflector and is polarized so that shiny objects will not be erroneously seen as the reflector.  An innovative single optical axis design eliminates sensing deadband.  A second model also includes an output that monitors signal strength.

“These sensors are perfect for applications that require more signal strength than is available with background suppression sensors, and sense at either very close or long sensing distances.  They can be used when rigid reflectors or even reflective tape must be detected up to the sensor face, as a standard retroreflective mode sensor would typically not see reflective tape unless it were two to four inches from the sensor.  They are also well suited for detecting objects such as solar cell wafers and packaged tubes or cartons where precise and repeatable leading edge detection is a must,” explains Allison.

Lastly, new ML4.2 Series thru-beam sensors deliver maximum signal strength in situations where retroreflective and background suppression models do not have sufficient optical power.  They feature an optical alignment aid to indicate marginal signal strength, a status LED to indicate if small objects are not detected at high speeds, and quadruple the speed of previous generation thru-beam sensors.  They are ideally suited for applications with sensing distances up to at least 8 meters, and in dirtier environments.

All  non-thru-beam ML4.2 Series sensors feature integrated cross-talk immunity to eliminate concern for side-by-side mounting, a tamperproof design with no external adjustments, 4-in-1 output to reduce inventory requirements and wiring hassles, and superior immunity to ambient light even for high-frequency energy-saving lights.  They also feature diagnostic LEDs in the front and back of the housing for quick and easy status indication, an antistatic and scratch-resistant glass lens ideal for printing and paper environments, and metal-reinforced mounting holes.