How much was the bill? 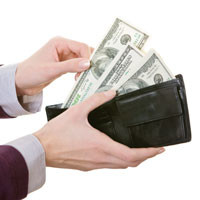 Mr. Brown pays his restaurant bill with a 100 Dollar note. The waitress mixes up cents and dollars with his change. On his way home, Mr. Brown loses 5 cents without noticing it. At home, he realizes that he received twice as much change than he should have.

How much was the bill?

In reality, the bill was about 68.37 dollars. Mr. Brown should have received 31.63 in change. Due to the mix up of cents and dollars, he received an amount of 63.31. After losing 5 cents, he still had 63.26; which is double the correct amount of change mentioned above.

You will get the correct solution by setting up a linear equation:

If you subtract 5 cents from this amount the double sum of the correct amount (mentioned above) is the result:

After transposing the equation you have:

This expression represents a linear equation. The associated definition area is 0 < X < 100 (as he paid with a 100 dollar bill).

X and Y are natural numbers, thus, only integer values are possible.

© 2021 All Rights Reserved. Pepperl+Fuchs does not sell personal data.