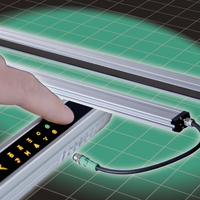 LGS series light grids come with a range of noteworthy functions previously found only on much more expensive devices, including super-fast object detection even with beam crossover enabled, the option of not just detecting objects but identifying them, and even remotely communicating data via an IO-Link interface.  Even if one or two beams are permanently obstructed due to circumstances in the application, they can be ignored with the beam blanking function. At startup, the signal strength is automatically adjusted and optimized for the environmental conditions making switching more reliable and enabling faster response times. As a result, the LGS series is an easy-to-install and operate sensing solution ideally suited for warehousing, material handling, packaging, and general automation applications.

The feature-rich and cost-effective design makes the LGS series ideal for applications ranging from the simple to the complex. Examples of relatively simple applications include monitoring an area for falling objects, ejection control, and the detection of parts as small as 4 mm. Examples of more advanced applications include overhang detection or web sag and height monitoring. Using the integrated height monitoring function, up to three levels of control can be set with the touch field. More complex application examples include object or hole profiling, where objects cannot only be detected but identified using the integrated object identification function. In any of these applications, programming and detection is accomplished quickly and easily without requiring a PC and without using software.

“LGS light grids can be programmed using a capacitive touch field located on the receiver, and no PC software is required. In fact, the LGS Series is the first sensor in its class to enable programming and configuration utilizing a modern, capacitive touch screen. Even if the user’s hands are dirty or lightly gloved, it takes just one finger or a thumb to configure the various built-in functions,” says Michael Turner, Product Manager, Pepperl+Fuchs. “And unlike the consumer electronics type, the LGS touch field is designed to withstand the normal and often unfavorable conditions found in the industrial world.”

LGS series light grids offer a rugged, IP67-rated aluminum housing available with customizable field heights from 100 mm to 3,200 mm, a broad range of beam spacing options from 8 mm up to 100 mm, and provide reliable operation in temperatures as low as -30 degrees C. Response times vary from 2 ms to 20 ms depending on the number of beams (4 beams to 253 beams) in the light grid.