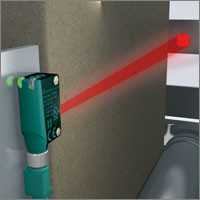 The ML100-8-W is a high-performance diffuse mode sensor with a very wide visible light spot. The extra-large light spot prevents incorrect switching on heavily textured surfaces and is highly resistant to vibration and object tilting. This diffuse mode sensor is perfect for use on conveyor routes for glass or module transport. In addition, it is ideal in flat panel production, particularly on lifting tables or track switches. In these applications, a retroreflective sensor for glass detection cannot be used due to interfering reflectors in the traverse path. 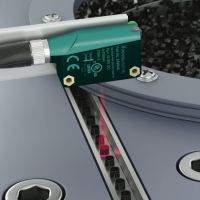 The ML100-8-HW version with background evaluation is based on the triangulation principle. The receiver, consisting of a near-field element and far-field element, is able to clearly distinguish between a background, such as a metal frame, and an object in the detection area. In doing so, the sensor references the determined background. The object is detected if, due to the geometrical arrangement, more light falls on the near-field element than on the far-field element. It is also recognized if no light reaches the receiver, e.g., if the light is reflected by a shiny object. This enables operation without the need for reflectors. The diffuse mode sensor also reliably detects flat objects or objects with low reflectivity in front of a close background, e.g. black rubber parts on conveyer belts. 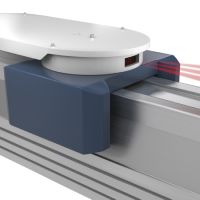 In the field of sensors with background suppression, the ML100 Series has been expanded by the diffuse mode sensor ML100-8-H. This sensor has three light spots, which enable redundancy. As a special feature, the outputs include a logical AND and OR link. The OR output activates when one of the three light spots is detected, meaning non-uniform objects can be reliably detected. The AND output only activates if all three light spots are detected. Thus, even object properties can be recognized while interference in the surrounding area, such as dust, can be ignored.