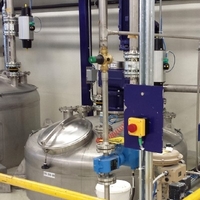 F31 sensors signal the position of valves via AS-Interface.

JOTUN is a Norwegian manufacturer of water and oil-based paints for decorating, wood preservation, corrosion protection, and marine applications. The paint is manufactured in a large processing plant that consists of several outdoor tank farms and two building complexes, each with three floors. To produce the paint, all plant components must be connected to one another in a safe and reliable manner. The outdoor tank farms that supply the plant are connected to the control system via AS-Interface. A large number of valves – located in explosion protected areas – are involved in the paint manufacturing process. Numerous F31 inductive sensors signal the position of these valves via AS-Interface. The process of blending oil-based paint colors and filling pots with the paint takes place in hazardous areas that are equipped with AS-Interface G5 series EX modules. 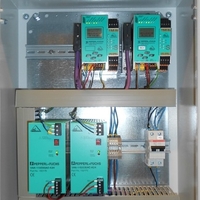 The plant is being designed in accordance with the latest regulations set out in the machinery directives. As part of this process, the new machine and plant components are linked together in an intelligent and reliable manner – much of the existing machinery would also be included in the concept. Ongoing production would be affected as little as possible. 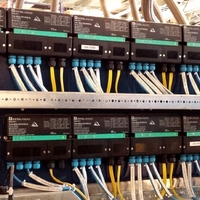 The machine parts were networked quickly and easily via AS-Interface. Emergency stop buttons were positioned to be visible on all plant components from the hall entrance. Using these buttons, the decentralized, stand-alone machines which feature separate safety installations – can be switched off if necessary via the safe AS-Interface output modules.

The plant components were interlinked in a safe and reliable manner via a separate Ethernet network for which there is an interface on the AS-Interface K30 master monitors. This enables a separate tank farm and two other buildings, each with three floors, to be reliably linked. A number of Safe Link Gateways set up in a network were used for this purpose.

Offering a simple wiring setup, freedom with regard to topology, an intelligent overall concept to ensure simple expansion, and the scope to transfer secure and nonsecure signals on one line only, AS-Interface from Pepperl+Fuchs is the optimal solution for this application. This solution makes it easy to integrate existing safety systems and means the plant can be converted in a very short amount of time.