As soon as the train has pulled away from the platform, the information on the display board is removed. This happens automatically and no active intervention from the control center is required, because the sensor that detects the train's movement is mounted on the actual platform and is connected to the display system. However, the signal from this sensor is also analyzed for higher level control of the trains. The train detection system from HNC uses an ultrasonic sensor from Pepperl+Fuchs to determine whether or not a track is free. 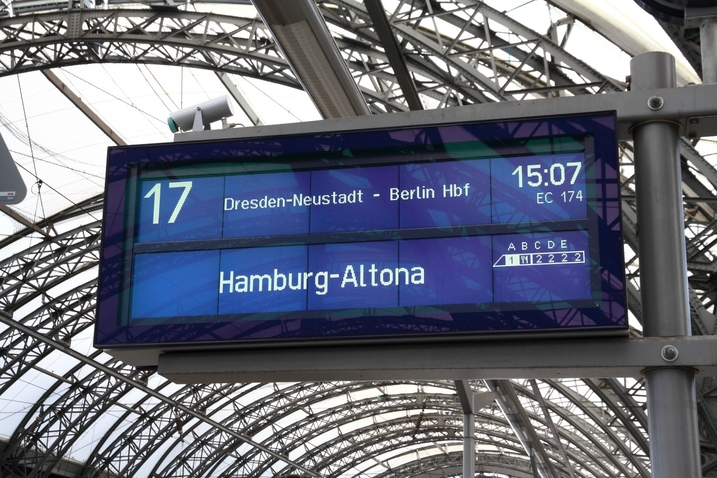 The train detection devices from HNC provide essential information to control the information displays. The devices can be mounted on the display itself.

If tracks are to be used efficiently and passengers are to be provided with reliable information, the control center must know precisely whether a track is free or occupied. HNC Controlling Networks in Mittenaar, Germany, specializes in devices that detect the movement of trains. The company's products are used on train platforms in several European countries as well as in Israel.

The train detection devices in the ZHS series from HNC combine a microwave sensor and an ultrasonic sensor. The microwave sensor operates on the radar principle. Its electromagnetic waves use the switch from car to coupling gap to detect the movement of the moving train. In contrast, reliable detection of the stationary railway vehicle is handled by the ultrasonic sensor from the UB4000-30GM series from Pepperl+Fuchs. "It provides essential basic information," says Christiane Pfeiffer of HNC. "Its measuring signal is robust and reliable. It detects trains regardless of their shape and color. Wet, reflective, and dirty surfaces are not a problem for this sensor." The ability of the measuring principle to function in any weather conditions is an important factor for outdoor use. Ultrasound is just as resistant to snow, and mist as it is to dust and exhaust gases.

The train detection devices in the ZHS series from HNC combine a microwave sensor and an ultrasonic sensor.

The combined sensor package is usually installed on the display board itself or under the platform roof. In both cases, the ultrasonic sensor is directed at the outer edge of the train roof diagonally from above. It emits short ultrasonic pulses and detects the echoes that are reflected from the object—in this case the train. Distance from the sensor widens the detection range, which is often referred to as the sound beam. The shape of the sound beam can be adapted to the application. The sensors used by HNC have a detection range of four or six meters. Their sound beams have a particularly large diameter so they can scan a correspondingly large area of the outer surface of the train. This ensures that varying train contours are reliably covered by the detection range and the sensor can still detect the stationary train if it is focused on a coupling gap between two cars.

"Even a buildup of dirt on the sensor itself is not a problem for signal transmission," states Wolfgang Fischer of Pepperl+Fuchs. He supports HNC with any questions relating to ultrasound. "The membrane that generates the sound vibrates, preventing any significant buildup of dirt on the area that is essential for sending and receiving pulses. This means that the sensor requires neither maintenance nor cleaning."

One or two HNC sensors are used per platform. Positioning a sensor at both ends of the platform allows the entrance and exit to be reliably detected in both directions when two short trains travel from the same platform in different directions. "The microwave motion sensor detects a movement," says Christiane Pfeiffer regarding the function of the devices. "The ultrasonic sensor detects that an object is located on the track. If the object is still detected by the sensor when it has stopped moving, this means that the train has stopped. The departure is detected using the same principle. The motion detector indicates that the train is pulling away and the ultrasonic sensor detects when the track is no longer occupied. Short shunting movements or interrupted arrivals and departures can also be read from the combination of signals. The same applies for passing trains."

The control center uses the data from the sensors for passenger information; such as the announcement stating the connections that automatically plays after the train stops. After departure, the information on the display board is deleted or changed to the next train announcement. Cabinet systems are also supplied with status information and lighting systems are managed intelligently. This can contribute to significant energy savings for small train stations with sporadic trains.

HNC is currently developing a new generation of the sensor package, with an integrated PC and network connection for LAN and WLAN, Internet access, and a Bluetooth option. This will elevate the device’s intelligence and communication capability to a new level. "Users will get a whole range of additional functions and usage options," explains Christiane Pfeiffer. "The devices from the new generation will be backward compatible. We will also continue to use components that have already proven successful in continuous use in railway operation."

This definitely applies to the ultrasonic sensor. "We have used this sensor for eight years already and have only had one customer complaint in that time. The number of repairs is also minimal. And we know that Pepperl+Fuchs is a contact partner who provides us with support whenever we need it. Our target industry is extremely sensitive to factors concerning safety and time. The UB4000-30GM will also deliver the essential signal for the next product generation."