On the Gold Scale 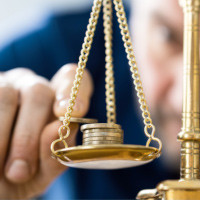 Which coin is the fake one?

At an antiques market, a man wants to buy a beautiful old vase for nine gold coins. However, the merchant immediately recognizes the man and knows that he is a fraud. The fraudster is known for always foisting a single fake coin on merchants when they make a purchase.

Now nine golden coins are laying on the table in front of him. They do not differ in appearance but one of them weighs significantly less than the other eight coins, which weigh 200 grams each.

To check which coin weighs less than the others, the merchant has a beam balance at his disposal. But he is only allowed to weigh twice.

By only weighing twice, how can the merchant figure out which of the nine coins is the fake one?

The merchant first weighs only six of the nine golden coins. To do this, he places three coins on each of the two balance pans.

Now there are three possibilities:

In the next step, the merchant takes the three coins that include the lighter coin. He distributes two of them among the scales and puts one aside.

Now he can see which weighing pan is lighter, or if they weigh the same. Therefore, he knows which coin of the three must be the fake one.