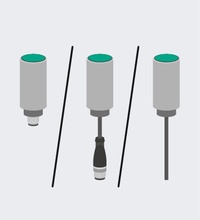 Capacitive sensors can be electrically integrated into systems in various ways. The various versions of sensors with fixed cables with or without plugs or with connector plugs are available as standard in various designs.

Sensors of this type have a designated area in the sensor housing for electrically interconnecting the sensor to the plant. The terminal compartment allows users to freely select the connection cable. This is of particular benefit in applications involving UV resistance or resistance to chemical agents. In addition, users are not tied to fixed cable lengths, and the terminal compartment offers increased tamper protection compared to versions with connectors.

Pepperl+Fuchs capacitive sensors with terminal compartments may contain the type designation "KK" in the second position of the type code.

Fixed Cable with or without Connector

Sensors of this type have a fixed cable that can be preassembled or a fixed cable with a typical connector for industrial automation. Sensors with fixed cable are affordable options, since they do not require an additional single-ended female cordset and keep the number of connection points to a minimum. Connection to special connectors is possible depending on the application requirement (e.g., automotive industry).

The following table provides an overview of common capacitive sensors with regard to the electrical version, sensor type, switching examples, and typical data.

Sensor Types: Wire Colors and Plug Assignment According to EN 60947-5-2

Below you find an overview of the pin assignment and wire colors of the capacitive sensors.

The pinout numbers correspond to the numbering of the pins on the connector plugs. This does not apply to proximity sensors for AC and those with three-pin 8 mm plugs.

Take a look at the range of Pepperl+Fuchs capacitive sensors.