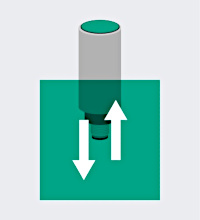 IO-Link is a point-to-point communication system. Sensors with IO-Link (these can be photoelectric sensors, inductive sensors, ultrasonic sensors, etc.) are backward compatible with binary sensors with a switching output. If an IO-Link master is not connected to the sensor, the sensor operates in SIO operating mode (SIO = standard input and output) with a conventional switching output. Integrating an IO-Link sensor into existing systems is thus possible with no restrictions. If the sensor detects a connected IO-Link master when it is switched on, it operates in IO-Link communication mode. In communication mode, the full range of functions of this interface technology is available:

The use of IO-Link also offers the following advantages:

Always install sensors with a three-core cable to the IO-Link master.

Sensors on connection pins 3 or 5 often provide additional functions. When a sensor with a four-core or five-core cable is connected to a master with a Class B port, this can result in the following effect: The galvanically isolated additional supply of the Class B port (pins 3 and 5) is coupled with the standard IO-Link cables via such additional lines. This may affect the function of the sensor. In a worst-case scenario, this may damage the sensor.

Sensors with appropriate bus interfaces can use a joint transmission path for communication between several nodes in the network of a production plant. The kind of bus system used is largely determined by which programmable logic controller is used.

The actuator-sensor interface (AS-Interface) replaces conventional wiring technology at sensor-actuator level. AS-Interface has firmly established itself as a global standard for cost-effective signal transmission on a single line for energy and signals. It is an open system and therefore found below all common fieldbus systems.

DeviceNET is an open fieldbus standard based on the CAN protocol. ControlNET is a network protocol developed for industrial automation applications. The advantages lie in the redundant cabling and the fact that communication can be clearly terminated and highly deterministic. Both fieldbuses use the Common Industrial Protocol (CIP) as a common application layer and can therefore easily be used with EtherNet/IP.

CC-Links are open, industrial networks used for control and for information transmission. The fieldbus solution has a high transfer speed and deterministic communication. CC-Link can be used for machine control and for controlling processes, factory equipment, and building automation.

MODBUS is an established open requester-responder or client-server protocol. MODBUS can be used either with serial interfaces or with Ethernet. Various operating modes are available for data transfer: TCP, RTU, and ASCII. MODBUS is frequently used in factory automation.

CANopen is a CAN-based protocol that transfers data particularly quickly. CANopen is used in automation technology, drive technology, and for networking complex devices. CANopen is standardized in the European standard EN 50325-4.

INTERBUS is a universal fieldbus system. It is used in many different application areas such as at the sensor/actuator level and in process automation. INTERBUS is particularly popular in the automotive industry.

Sercos is an automation bus that functions as a standardized open digital interface for high-speed, real-time communication. Sercos can be used to communicate between industrial control panels, peripherals, and standard Ethernet network nodes.

Take a look at the range of Pepperl+Fuchs inductive sensors.